Paralympic hopeful saddles up for competition

In January 2020 Phoebe, together with horse Smartie, achieved a qualifying score for the Tokyo 2020 Games. As the Games have been postponed she is now working towards re-qualification for the 2021 dressage competition. 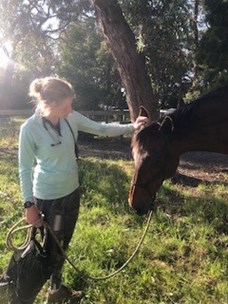 Phoebe competes in Grade IV para-dressage in which the riders perform movements with their horses, such as steps and trots.

She currently trains five times a week and says that if she does not make it to Tokyo she will aim for Paris in 2024.

Re-qualification for the delayed Tokyo games is difficult. The selection policy for 2021 has not yet been announced by the sport’s governing body.

Phoebe also needs to ensure that both she and her horse are in peak physical condition at the right time. “You have to keep your horse fit for another year, and time things right for the new competition,” she says.

This is not the first time that Phoebe and her family have had to overcome serious challenges.

Phoebe was diagnosed with cerebral palsy at the age of one and her father Doug introduced her to horse riding when she was five years old. Doug, who had been in a wheelchair since childhood, took her to the McIntyre Centre, a Riding for the Disabled organisation. It was the same place where he had learned to ride.

Phoebe fell in love with the horses and the riding. The riding also became a special father-daughter time. Doug took her riding every week until he sadly passed away in 2008.

In 2017 Phoebe and mum Shaneen made the big decision to relocate from Brisbane to Melbourne so Phoebe could pursue her sporting dreams.

“It was a real change of lifestyle. We didn’t have much, at the time we only bought what we needed with us,” says Shaneen.

Phoebe was also struggling with inadequate NDIS support. She has many complex needs which include spastic quadriplegia, a severe form of cerebral palsy.

To top it all Phoebe lost all sensation on her left side in 2018. Her doctors did not have a conclusive diagnosis but suspected concussion or a stroke.  Phoebe had to stop riding for about eight months while she recovered. Her reins and boots were later modified just so she could remain upright on Smartie and hold her reins.

This resulted in Shaneen “using all her savings” to pay for Phoebe’s supports.

“I was at my wit's end,” says Shaneen. “We’d been trying to get her NDIS plan reviewed but we just had no help and it was just awful.” 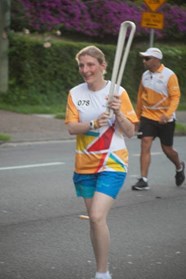 “Windermere were the only ones that took us seriously and stopped and listened to us. I had no idea where to turn to or where to go. We were in a different state and I had no support, no one else, just Phoebe and me,” says Shaneen.

“It was a long road to get Phoebe a new NDIS plan but with the help of Windermere’s planning review support and gaining more reports and assessments we were successful in increasing Phoebe’s NDIS funding substantially to get her all the supports she needs,” says Shaneen.

Now Phoebe is feeling much more supported with a “wonderful” occupational therapist and psychologist. She is also receiving NDIS support coordination and plan management services from Windermere.

“We are both really tired of it all. It was a long hard battle that we just couldn’t have done without Windermere;” says Shaneen.

Windermere also surprised Phoebe and Shaneen with a Merry Mission helping hamper to help them make ends meet over Christmas, a gift that Shaneen describes as a ‘Godsend.”

Now Phoebe has the right supports in place, she can concentrate on her training.

We wish her and Shaneen all the best for the future.

Windermere offers a range of NDIS services, including support coordination. For more information visit here or call the team on team on 1300 946 337.