From tantrums to calm: how Joseph changed his life in a year

Young Joseph’s frequent outbursts and meltdowns were causing huge problems at both school and home. But, thanks to the right NDIS supports Joseph is now calmer and happier. 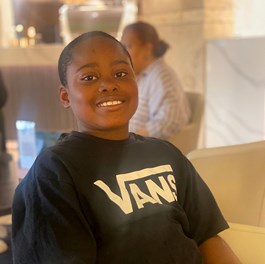 In early 2020 Joseph and his family were struggling to manage his emotions and behaviours.

“He was having heaps of breakdowns at home and was even worse at school. He was not listening to his teacher, and was running out of his classes,” says sister Eveline.

Joseph was at a special school and had no out of school therapies or supports. This changed after Joseph received an NDIS plan and the family asked Windermere to provide NDIS support coordination services to Joseph in March 2020.

The role of a Support Coordinator is to connect people with an NDIS plan to the supports and services that they need.

At the time primary school age Joseph was also due to transition to a mainstream school at the start of 2021 and the family feared that he would not be able to do this successfully.

Joseph’s support coordinator Lisa assisted Joseph and his family to organise a range of NDIS supports that were identified in Joseph’s NDIS plan.

An Occupational Therapist also started to work with Joseph on assisting him with his fine motor skills, such as holding a pen.

During Melbourne’s COVID-19 lockdowns Joseph’s sessions were held virtually through telehealth. “He’s had both telehealth and face to face appointments and the telehealth were not bad, but they were much better when he could do them face to face,” says Eveline.

Gradually, over the last 12 months Joseph has become happier and calmer. He has now made the transition into mainstream school, has improved his literacy, made new friends and even learnt to ride a bike.

“He used to get really angry, really quickly and run away. But now because of all the support he realises that he needs the help and wants it too,” says mum Florence.

“He has gone from a boy who would not attend school and had frequent outbursts to being much happier and calmer,” says Support Coordinator Lisa.

Joseph and his family are very pleased with the support that has helped Joseph to make so many positive changes.

“We thank Lisa and Windermere for giving us the opportunity to get Joseph the right help and the referrals for the right people. We are all very happy,” says mum Florence.

For more information about Windermere’s Support Coordination services visit here or call the team on team on 1300 946 337.